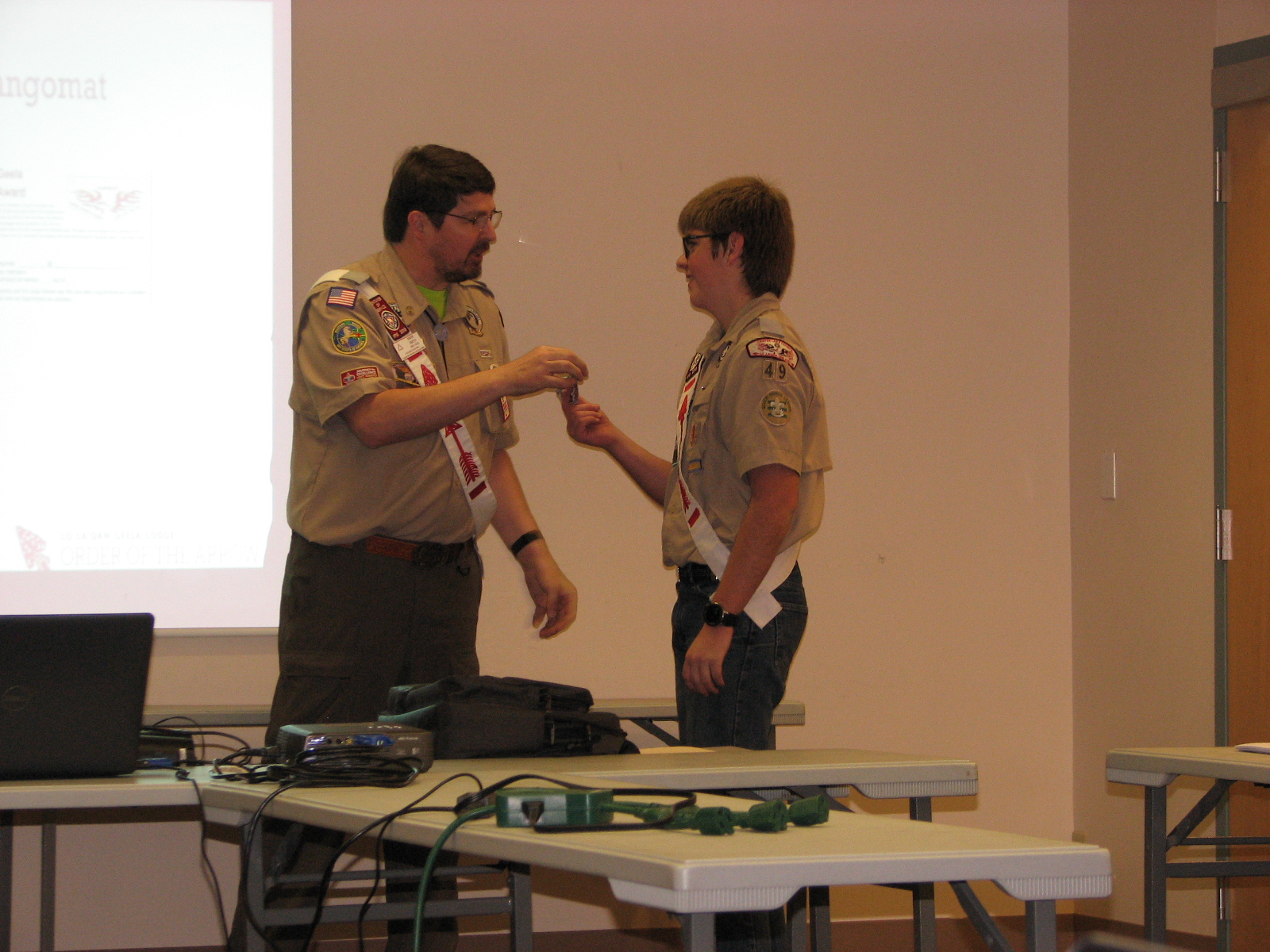 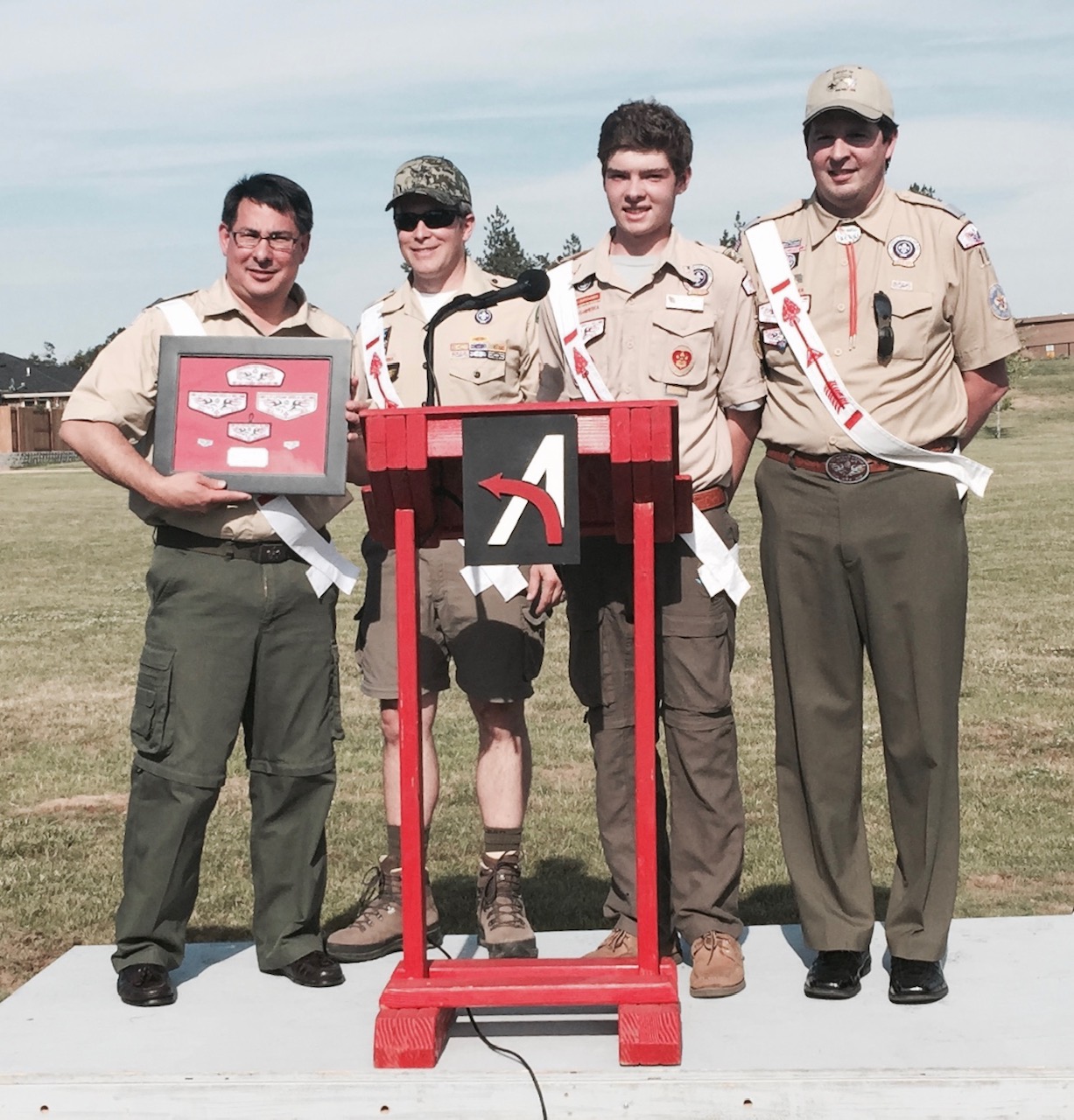 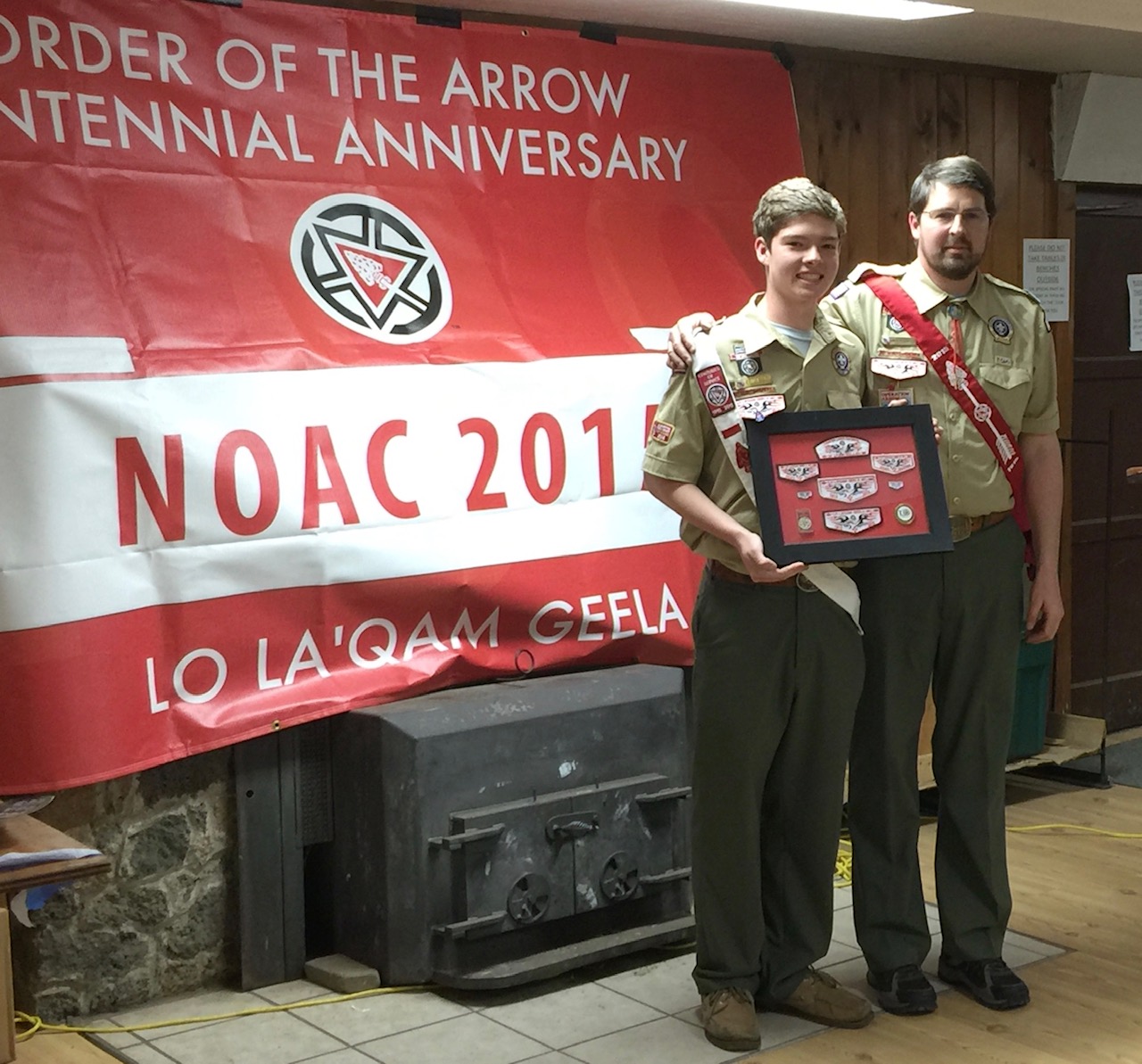 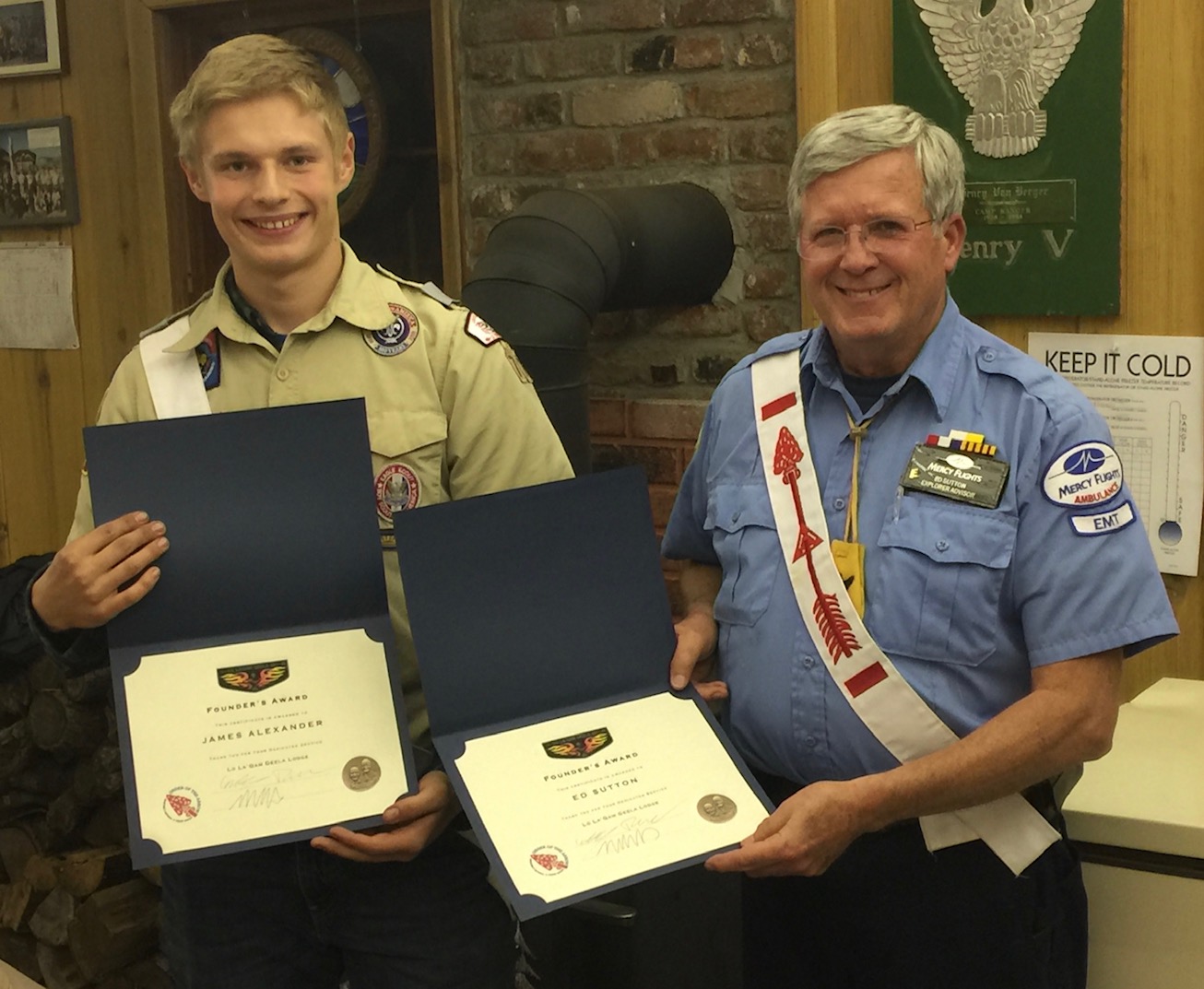 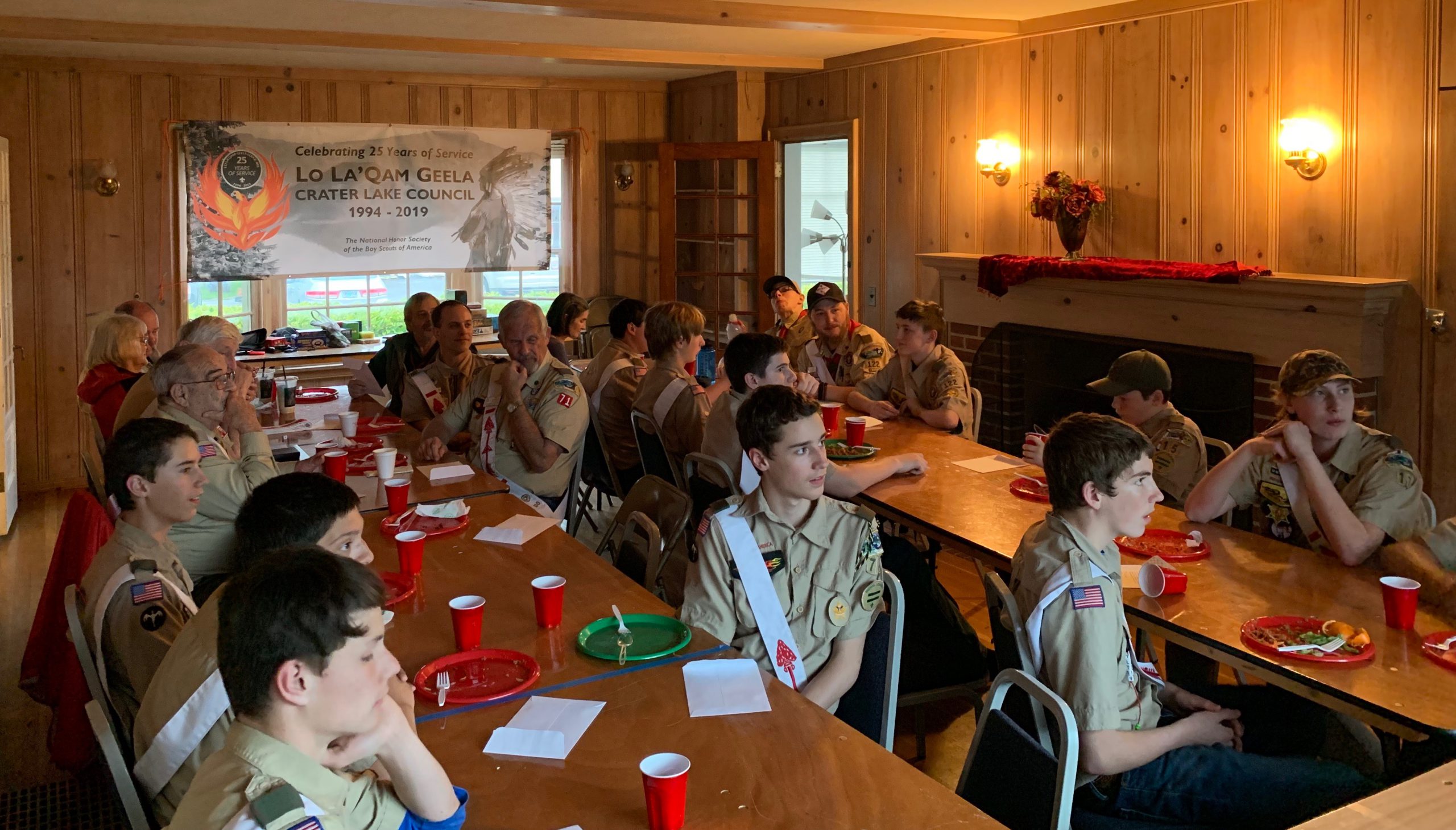 Lo La’Qam Geela recognizes its outstanding members each year at the Fall Fellowship and Banquet with the presentation of awards.

Founders Award
Introduced at the 1981 National Order of the Arrow Conference, the Founder’s Award recognizes Arrowmen who have given outstanding service to their lodge. The award is reserved for an Arrowman who demonstrates that he or she personifies the spirit of selfless service, as advocated by founder E. Urner Goodman and cofounder Carroll A. Edson. The award features a bronze medallion, with the founder’s of our order. A red ribbon with a gold arrow is awarded for uniform wear.  Recipient List

Keeper of The Flame
Designed to honor those individuals who directly helped the Lodge Chief in their year, this award is presented to anyone at the discretion of the Lodge Chief, in consultation with the Lodge Key 3. Up to six can be presented each year. The award is a black and red neckerchief, allowing new members to easily see, identifying the key Arrowmen at events. Recipient List

Arrow of Honor
The Arrow of Honor was created to recognize and honor those Arrowmen who have provided outstanding service to the Lodge. The Lodge typically presents two Arrow of Honor awards each year with at least one presented to a youth. This is a separate award than the Section W-1S Arrow of Honor. The award features a certificate signed by the Key 3 on a ceremonial folder. Recipient List

Elangomat Award
The Lo La’Qam Geela Elangomat Award is presented to youth Arrowmen who perform the role of Elangomat during an Ordeal and meet certain other requirements. After the Induction, the Elangomat must follow up with the new Arrowmen via calling or email and have evidence of doing so, encourage them to be active in the OA, and have at least a 30% Brotherhood conversion rate of their clan members the following year. The award can be earned once per year. The Elangomat flap is awarded on completion of the form. Recipients are re-stated at Fall Fellowship. Recipient List
Elangomat Award Requirements Card
Elangomat Guide

Ceremonialist Award
The Lo La’Qam Geela Ceremonialist Award is presented to youth Arrowmen and adult advisers who demonstrate proficiency as a ceremonialist. To earn the award, youth Arrowmen must memorize one or more roles in a Lodge ceremony and perform those memorized roles a total of three times (Pre-Ordeal, Ordeal, Brotherhood, or Vigil ceremony qualify). For an adult to earn the award, an adult must mentor a ceremonial team and advise the team in three Lodge ceremonies (Pre-Ordeal, Ordeal, Brotherhood, or Vigil) in which the team performs. The Adviser must then receive a nomination from another Arrowman. The award can be earned once per year. The Ceremonial Flap is awarded on completion of the form. Recipients are re-stated at Fall Fellowship. Recipient List
Ceremonialist Award Requirements Card (Youth)
Ceremonialist Award Adviser Nomination (Adult)

Distinguished Service Award (DSA)
Presented by the National Order of the Arrow Committee, The DSA is awarded biannually, at NOAC. Lo La’Qam Geela is proud to have a DSA recipient, Mike Bliss, who served as the Western Region Chairman from 2006-2013.

Centurion Award
Presented in 2015, the Centurion award was a one-time award for lodges to bestow on members of their choosing. Lo La’Qam Geela presented a Centurion award to Mike Goswick, Rob Patridge, Mike Bliss, and posthumously to Bill Clary.